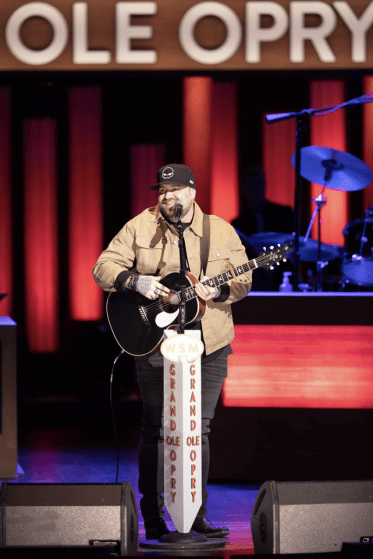 Average Joes Entertainment artist Sam Grow stepped onto the stage of the Grand Ole Opry for the first time Saturday night November 27, 2021, after being introduced by Opry host Mike Terry. As he stood in the famed inner circle, Grow performed his breakthrough hit, “Song About You,” followed by an acoustic version of “Go Right Now,” an emotional song he wrote for his father who passed away in 2018. Grow received a warm welcome followed by a standing ovation from the audience that included family, friends, and fans from near and far.
“Playing the Opry will always be the highest honor of my career,” remarked Grow. “It’s something that I have dreamed of since my Dad first drove me by the Opry House when I was 14. I wish so badly he could have seen it in person but I’m sure he was front row in the seats of heaven.”The uptempo, energetic “Song About You,” which has over 50 million streams, and “Go Right Now,” were both included on Grow’s recently released EP, “This Town.” Grow has been in the studio writing and recording new music scheduled for release in early 2022.
For updated information, visit Grow’s website.
Back