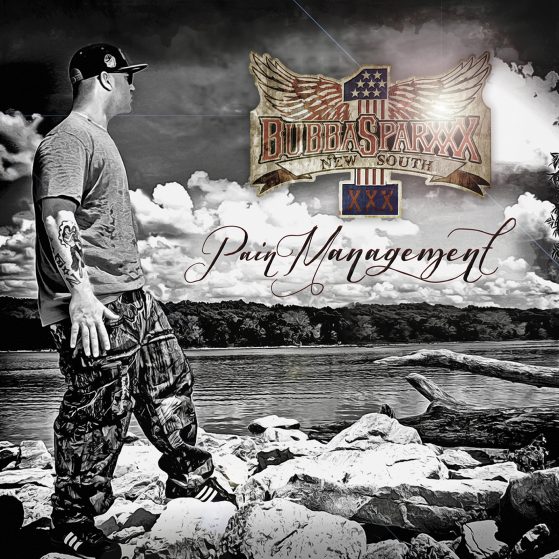 “This album is the real me,” Bubba Sparxxx says of his new eOne album Made On McCosh Mill Rd. “I’m genuine authentic country, and I’m also genuine authentic hip-hop. The thing about music is that people can smell when it’s phony, so I just let my soul be the backbone this time.”

When he first arrived at the beginning of the 21st century with his seminal smash 2001 debut Dark Days, Bright Nights and its equally innovative followup Deliverance, the pioneering Georgia-bred MC’s rule-breaking, crowd-pleasing combination of inventive hip-hop beats, vivid down-home verbal imagery and live acoustic and electric instruments struck a responsive chord with legions of fans who’d never heard anything like it before.

More than a dozen years later, Bubba’s visionary country-rap fusion has been accepted—and widely emulated—in the worlds of both hip-hop and country, with the rise of such successful country-rap acts as Colt Ford and The Lacs, with country superstars like Jason Aldean, Toby Keith and Tim McGraw tapping into rap phrasing and hip-hop beats, with rappers like Nelly, Ludacris and LL Cool J collaborating with country performers, and with traditional instruments becoming increasingly prominent in hip-hop.

But the original is still the greatest, and Bubba Sparxxxx—now back in action after an extended recording hiatus—is in the midst of a decisive creative renaissance that’s redefining the parameters of the genre that he helped to create. Bubba’s resurgence began with 2013’s well-received Pain Management, and continues with the even more impressive Made On McCosh Mill Rd., which stands as one of the artist’s most accomplished efforts.

“I’m proud of Pain Management, but it was the first record I’d put out in seven years, and it was kind of just knockin’ the dust off and gettin’ back into the swing of things,” Bubba explains. “With Made On McCosh Mill Rd., I feel like I’m hitting on all cylinders again.”

The fact that the new album’s title track, which features Danny Boone of Georgia hard-rock/hip-hop band Rehab, references the area of rural Georgia where Bubba grew up is a reflection of the project’s personal edge.

“‘Made On McCosh Mill Rd.’ is a tribute to the road that I grew up on, north of LaGrange, Georgia,” Bubba explains. “It’s a unique place, and it’s synonymous with wild country living. The song is an ode to the culture that I come from, and the work-hard/play-hard mentality that people have where I come from.”

Made On McCosh Mill Rd.’s vital balance of personal expression and flat-out fun is embodied by such rousing, heartfelt tracks as “Past Is Practice” (featuring rising country artist JJ Lawhorn), “Pay Attention”(with a guest appearance by up-and-coming country-rappers the Redneck Souljers) and “Prolly Right” (which introduces Bubba’s side-project group I4NI).

Elsewhere on the album, the Southern-pride anthem “Heart of Georgia” (featuring D-Ray of I4NI and D-Thrash of the Jawga Boyz), the swaggering “Lock Dem Hubs” and the upbeat “Good Day” team Bubba with producer and longtime collaborator Shannon “Fat Shan” Houchins, who helped Bubba to build his sound on his 2001 debut album, and has since nurtured his label Average Joe’s Entertainment into a potent force that’s served as ground zero of the country-rap explosion.

“With all the time that I spent away from music, I had a lot of time to step back and take a look at what I’d done up to that point in my career,” Bubba notes. I found that people who were serious fans of mine liked the music I’d done on Dark Days, Bright Nights and Deliverance. So I knew that I wanted to go in that direction when I came back, and that’s what Made On McCosh Mill Rd. is.

“I’m a fan of live instrumentation, banjos, harmonicas, fiddles, violins, acoustic and electric guitars,” he continues. “But I’m also a fan of 808 kick drum, because I like my trunk to rattle. At the end of the day, I’m about as country as they come, and I love country music, bluegrass music, folk music, rock music. But in my heart of hearts, I love hip-hop music and rap music first and foremost.”

Made On McCosh Mill Rd. powerfully evokes Bubba Sparxxx’s deep affinity for multiple musical styles, as well as the rural working-class upbringing that shaped his iconoclastic personality. Born Warren Anderson Mathis, he grew up on a farm in a rural area near LaGrange, Georgia, 65 miles southwest of Atlanta. He first discovered hip-hop through his closest neighbor, who lived half a mile away. He soon began absorbing a wide array of rap music, in which he recognized the same rebellious spirit of the country music that he loved.

“The town I grew up in was about a 50/50 mix of African-Americans and white people,’ he continues. “When I started playing sports, I saw how sports had the ability to bring people together. And then when I was in middle school, I started to see how hip-hop was bringing people together in my community. And I felt like, if it could do that in a rural Georgia town, it could probably do it everywhere.”

Although he began writing and performing rhymes at 15, rapping remained a high school hobby, as Bubba earned All-Region honors as a tight end and linebacker for his high school’s football team in his senior year. After high school, he moved to Athens, Georgia, and soon after was introduced to producer Shannon Houchins, who was receptive to Bubba’s ideas and became his partner in developing the country-rap hybrid that he envisioned.

Bubba Sparxxx’s debut album Dark Days, Bright Nights was initially released on the artist’s own NonCents/11th Hour label, before being picked up for national release by Interscope. The Interscope version of the album—which included production from super producers Timbaland and Organized Noize—debuted in October 2001, was Timbaland’s first release on his “Beat Club” imprint, and immediately took the music scene by storm.

Dark Days, Bright Nights debuted at #3 on the Billboard album chart, with the Timbaland-produced “Ugly” becoming a massive hit, while the song’s memorable video established Bubba as a powerful, if unlikely, presence on the hip-hop landscape. He soon became a familiar media figure, performing on such TV shows as Saturday Night Live, Late Show with David Letterman and The Tonight Show with Jay Leno, and donating his time to travel to Kuwait and Iraq to perform for U.S. troops.

An equally distinctive and adventurous second album, Deliverance, arrived in late 2003, debuting at #10 on the Billboard chart, and winning a similar level of critical acclaim and peer respect. One of Deliverance’s admirers was OutKast member Big Boi, who signed Bubba to his Virgin-distributed Purple Ribbon label and released third album, The Charm, in 2006, which returned Bubba to the Billboard Top Ten with the hit “Ms. New Booty.”

Now, with the release of Made On McCosh Mill Rd., Bubba Sparxxx is ready to reassert his stature as country-rap’s originator, as well as a singular artist who’s truly in a class of his own.

“There’s a country-rap explosion going on now, so there are a lot of voices out there now,” he acknowledges. “But when I started, I was speaking for a generation of people who grew up in rural areas and were part of the hip-hop generation, and who look at issues like race and class differently than our parents did. In just that one generation, there was a huge leap in attitudes, and I saw that happen in the rural South because I was a part of it. Now, pretty much anybody under the age of 45 or 50 grew up listening to every kind of music, and pretty much anybody of that age group had some rap that they listened to.

“That’s a big part of what Made On McCosh Mill Rd.’s about,” he concludes.

“It captures who I am as a person, and it represents precisely how I feel now when I wake up every day. I’ve had some challenges in the last few years, but I don’t have much to complain about now. I’m just thrilled to be alive and thrilled to be making music, and I think that comes through.”

“This album is the real me,” Bubba Sparxxx says of his new eOne album Made On McCosh Mill Rd.  “I’m genuine authentic country, and I’m also genuine authentic hip-hop.  The thing about music is that people can smell when it’s phony, so I just let my soul be the backbone this time.”